I’ve changed my mind about supermarkets.

The other day I was quite excited about them, because they are still a surefire way to see people after spending the rest of the day alone.

Now they just terrify me.  Not everybody appears to be adhering to this concept of social distancing, and you’re more likely to see those uncooperative people in supermarkets, because those are essentially the only place people can congregate still.

I needed to buy some bits for my parents in Tesco.  I had to spend an hour or so psyching myself up to do so before marching into the store in my disposable latex gloves, snood (who would’ve known the Action Challenge branded freebie from the 50km walking challenge in the Cotswolds 2018 would have come in so useful!) and sunglasses.  A trio of people standing near the entrance looked at me in disgust as I wiped down my trolley with a Dettol wipe, “The world’s gone maaaaaaad” said one lady, in a Marge Simpson-meets-rusty-washboard voice that sounded like she smokes fifty fags a day.

I did feel slightly embarrassed by her shaming, but didn’t let her words get to me too much.  I had only to witness other shoppers coughing and sneezing, and kids running around touching stuff, to know that I was doing the right thing by erring on the side of caution, even though in many ways it might’ve seemed a bit overkill.  I don’t like to automatically distrust people, because most people are good and taking care right now; but when this virus stands to harm so many, my view is that you just have to treat yourself as a carrier, and treat strangers as though they are all carriers too, and keep your distance accordingly.

Coming out of the supermarket, I felt something similar to when you’ve overestimated your ability to hold your breath whilst diving down into a swimming pool, and face a long, desperate rise to the surface.  I knew when by the bread that I was at the furthest point of the store to be able to retreat back out from.  The question was – how to avoid the various perils I may encounter en-route – the coughers, the touchers, the sneezers and the wheezers.  Those who should be isolating, and the invisibles with the bug awaiting.  Gaming metaphors seem to be the trend here, and this particular moment felt like Frogger.  Or that curly copper wire thing you used to pay to try at school bazaars, usually manned by a grumpy looking girl, where you had to run the loop on a stick across it without touching the wire.  If you did, it would emit a sound that would simultaneously perforate your eardrums whilst making you leap back in terror.  In this instance, that sound is the coronavirus.

Later on, I took myself on a long, solitary walk around the town, but keeping away from the centre to help ensure I was sufficiently distanced.   As a result of this I experienced parts of Faversham I’ve never felt before, and walked down streets I’ve never before been down, like the residential roads over towards Bysing Wood, and out towards the church at Ospringe, returning home via the nearby paddocks that take you back on to the London Road.   The town glowed in the hazy springtime sun, evoking memories of Saturday afternoons as a child; celebrating the return of longer days and better weather by spending longer in the garden.  There was something incredibly peaceful about acknowledging this; a welcome juxtaposition to the chaos of everything else.  It felt relaxing; almost a way of making peace with the situation.  I relished the opportunity to see somewhere new too; even though it wasn’t far from home.  “Could this be one of the only gifts Covid 19 brings us?” I thought to myself, “a new way of looking things and appreciating what’s closest to home”.

I enjoyed the stroll and subsequent thoughts so much, that the following day – Sunday – I took myself on another walk in the opposite direction.  The craze with which this situation develops each day makes me wonder whether the opportunity to do even a walk may soon come to an end, so I was determined to get a big long nature fix whilst I still could.  I stuck to the desolate footpaths near the polytunnel farms (sorry dad, I still don’t know what’s growing inside them, in spite of this unexpected close-up inspection) and over towards Graveney before coming back along the railway line.  For a couple of hours, all seemed good with the world.  The rapeseed was out and glowing its bright yellow magic into the world.  Trees swayed smoothly in a light breeze.  Most incredible of all, were the number of bunny rabbits hopping about in front of me.  I can’t remember the last time I saw so many.

A Southeastern train passed by and I gave the driver a wave.  He waved back.  And that was pretty much the extent of my physical contact with anybody else today.

And it felt so important.  It felt so needed.

I took a look into the train and – unsurprisingly – saw carriages full of empty seats.  It won’t surprise me if they suspend the rail services soon.  An empty train splicing it’s way through the Kent countryside does nothing for our environment and for our fight as a nation to get through this battle.

But a simple wave back does make a girl feel less alone.

It really is the little things. 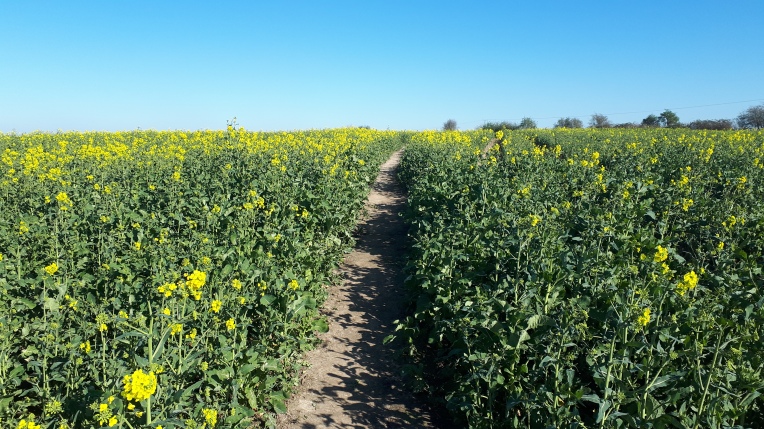