I’m going to avoid posting about the obvious this month.

I’ve made my feelings known among various people over the past couple of days, and I’m sure that there’s going to be a lot more to say over the next few weeks, months, years, decades and centuries.  The reality is that the implications of the decision that has been made have not even started yet, and I dare say that the magnitude of those implications is something that none of us will really know or understand until it’s all actually happening.
Which is an incredibly scary thought.

There are plenty of discussion points ahead but I’m not going to use this month’s post to essentially repeat everything I’ve been ranting about over the past 48 hours because quite frankly it will only wind me up even more, and wound up is not how I want to spend my Sunday.  Instead, I wanted to post something more lighthearted that may hopefully detract me from scouring the internet in desperation to see if having Huguenot blood and a fondness for confit de canard can serve as a prerequisite for applying for a French passport.

I am going to stick with a European theme though, and combine it with something that never fails to uplift and bring joy to my life – food.

So herewith, in no particular order… a list of some of my favourite European foods experienced during holidays on the continent…Enjoy.  Will you be giving any a go?

Spätzle is a variety of noodle which derives from the Swabia region of southern Germany.  Very popular in this and the alpine areas below, spätzle is a common accompaniment to any dish and with its soft, slightly chewy texture it’s easy to understand why.  Spätzle is most commonly served with meat or in a nutty cheese sauce with ham.  My favoured way of eating spätzle is with pork medallions and a creamy peppercorn sauce.  Very tasty. 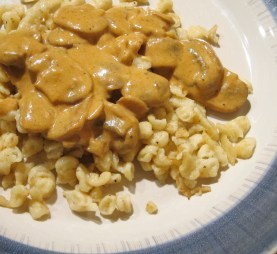 This is a funny one because I wouldn’t necessarily call myself a gherkin enthusiast, but I absolutely love cornichons (which are basically just baby gherkins too classy for Big Macs).  It was in France some years ago when I first noticed these miniature, green powerful pickles seem to accompany every dish I was served, and I liked them a lot more than I thought I would.  Juicy and crunchy with a sharp sweetness, cornichons would make great and revered leaders in a society of fruit and veg.

Of course Belgium’s contribution to this list would be chocolate-related, but I’ve chosen  something quite specific on the basis that even in our global society, this is one thing I’ve not yet seen available in the UK :  Pistachio fondant chocolate bars!  Any trip to a supermarche abroad will necessitate looking out for these beauts, which are essentially just Fry’s Chocolate Creams in a slightly more interesting flavour.

I could write essays proclaiming the values of the existence of French cheese, and it seems so harsh to select just one, but if I had to, then it would definitely be Comté.  Not dissimilar to the much more renowned gruyère, for me comté just edges it in the Battle of the Cheeses.  Nutty and creamy, this batch of mountainous delight permanently changed the way I think about jacket potatoes.

I’d heard somewhere of these Belgian burgers that seem to have a bit of a cult following, so I knew that when I went to Belgium earlier in the year that I had to give it a try.  Having walked around the entirety of Hasselt looking for a restaurant called ‘Bicky’, I succumbed to asking a waiter where I could find one and was directed to a small generic snack bar on a street corner.  Eating whilst stood underneath a large parasol on a rainy day, the Bicky burger did not disappoint, full of the most interesting blend of flavours stemming from the special ‘Bicky sauces’.  I had no idea what was in the burger but during an internet search that followed I discovered the following:

“The Bicky Burger is a tasty deep fried burger (a mix between chicken, pork and horse meat) topped with three unique sauces (the yellow Bicky Dressing, the Red Bicky Ketchup and the brown Bicky Hot Sauce), crispy onions and pickles or cucumbers served between a sesame sprinkled bun”.

The horse meat bit makes me balk a bit, but hey, at least they’re open about it…
Any visitor to Belgium must try the Bicky burger.

Some of my favourite childhood memories are of being in a massive adventure playground in Belgium eating a Frikandel during family Summer holidays in the 1990’s.  Best described as a ‘minced pork hot dog’, the Frikandel is deep fried and – unlike most other kinds of sausage – doesn’t have a skin.  It’s very unique tasting and to date I’ve not been able to find anything similar in the UK, but I’ll keep looking!

Okay I’m cheating a bit with this one, because quite clearly Germany is not the native home of tomato soup (in fact where is?), but – somehow – it never fails to serve up the best. Slightly sweet and often with a generous swirl of cream, I would base any decision of where to go for lunch in Germany on whether or not Tomatensuppe was on the menu.  The German kind completely puts Heinz to shame and don’t even get me started on Campbells…

Spaghettieis is essentially just vanilla ice-cream with strawberry sauce, but it’s genius.  The ice-cream is pumped out through a noodle press giving it a spaghetti-like appearance on the plate.  The strawberry sauce bears an uncanny resemblance to tomato sauce.  The coconut flakes are reminiscent of grated cheese.  It works and it’s amazing, and whoever came up with the idea easily makes my list of Most Influential People. Ever.

So there we have it folks, just a few of the continent’s best offerings and I write this as somebody who’s still not seen a lot of it, so who knows what else is out there to steal the love of my tongue…

Food distractions are just the best 🙂

Song of the Day:  Weezer – Summer Elaine and Drunk Dori

How this band are still churning out top songs after 20+ years without needlessly fannying around with the sound that makes them so great I’ve no idea, but I’m not complaining…