“…And here she is again, pictured with a friend who was unfortunately blinking at the time”

It was sometime in the late 1990’s and my mother was showing some photographs of my sister to my grandma (who was looking progressively bored with every photo that passed through her hands, bless her).

I’m not sure why, but the comment really made me chuckle – perhaps because of the way it was so politely put – and on those rare occasions when we pull out the old and dusty family albums, I still smile when I see that photo.  “‘Unfortunately blinking’. Heh heh.”

Not so long ago, imperfect photos like this were the norm.  The quality of our prints depended highly on a myriad of different things, including having the optimum levels of natural light, sufficient power left in the camera batteries, and whether or not our eyes could hold their own against flashes of extremely bright, whirring light.

There were no options to review, delete and re-take if you hadn’t quite been ready for the photo or if your hair looked a mess, and certainly no way of applying a filter to conceal a rash or wrinkles.  Your choices were a lot more limited, and with an allowance for around only 36 photos on each roll of film, you had to be a lot more restrained on how many you took.  Serial-snapping was not a thing unless you were extremely rich, which certainly wasn’t the case for those of us restricted only to pocket-money funds to buy the various means required to take photos.

You’d have absolutely no idea how the shutter-clicks would manifest until a few weeks’ later, when you’d pick up your prints from Boots, take yourself home, make a cuppa and begin to sift through with eager anticipation, being careful not to let your biscuity fingers touch the gloss.

One thing you were always guaranteed was an element of surprise and a range of reactions as you sifted through.  Some photos would come out great, but a lot of others wouldn’t.  In every roll of film there’d be the token blinking shot, and the mouth wide open shot.  There’d also be the ‘tooclosetotheflashandnowihaveaseriouscaseofmassivemoonfacegoingon’ shot, and the shot where – for some reason – things became a little confused during development and you had either a set of bright squiggly lines running through the middle or just a completely black photo.  Or whatever the hell happened here: 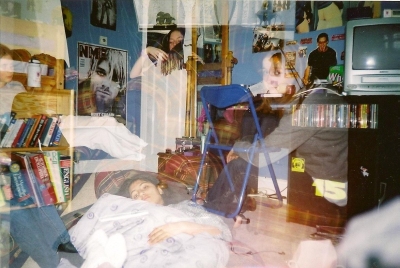 There wasn’t a lot you could do about the photos you didn’t like, or the ones you didn’t want anyone to see.  Even if you hid them away, there’d always be the danger posed by that person who would take a cheeky look through the negatives to identify those deemed inappropriate for public display.  You could always get some amusement out of that, if not by way of finding something embarrassing, but from the fact that even your most favourite people on earth generally looked pretty damn scary in the negatives:

Jump forward twenty years or so, and technological advances mean we can all now have a gallery of personal photos made up of the kind of images we once thought we’d only ever see in glossy magazines.  Built-in filters, and drives that can hold thousands of photos, mean you can take a photo again and again until you feel it looks just right, and even if you don’t feel it get to that stage, you can edit it until it does.  The skill of a good photo is no longer about the person taking it, or even the subject matter, but the equipment being used, or so it seems.

It’s useful in many ways, yet so anticlimactic in others.  Insta-perfect picture after picture is nice for a while but there’s also something somewhat underwhelming about it, not to mention something quite sickly about the culture of vanity it has embedded into a society that used to be way better at laughing-off the permanent capture of its windswept hair or accidental gurn.  When did we start taking ourselves so seriously, and for what purpose?  I’m not sure I feel comfortable with the way it’s so easy to dismiss aesthetic imperfection these days.  I think that’s something far-better embraced, and appreciated.

I do miss looking through photo albums which – when you think about it – mirrored life itself – mixing the good, bad, messy, amusing, wonky, bizarre, the unintentional, and everything else within a combination of purely natural photos.

And I miss the suspense of not knowing what the photos would turn out like, finding one you love, and instantly being able to stick it up on the fridge door so that every time you reached for the milk, you manouevred the smiling wee face of great-grandma back and forth.

I miss the days when a ‘good photo’ was a result of chance, the ‘one shot’ that truly paid off despite unfavourable technology and too much sunlight.  They had more of an impact that way…

…Perhaps it’s time to buy a new-old camera, before I blink-and-miss the opportunity to…

Song of the Day: Sleepwalkers – Reasons to Give Up In You

Catchy pop-rock from Richmond, Virginia.  I fell in love with this track the very first time I heard it.  If you’re still looking for your Summer anthem for 2018 then here it is: